Trinity Episcopal is an independent school that teaches grades 8 – 12. The school offers many gems to its students: it’s the first Richmond International Baccalaureate World School, it has outstanding academic and arts programs, and it is formidable in athletics, especially the Titan swimming program. But the most important takeaways from Trinity are the lessons about having compassion for fellow humans. As Head Coach of the swimming program Ashley Tremper states, “It’s not just about the swimming, it’s about being with each other.” 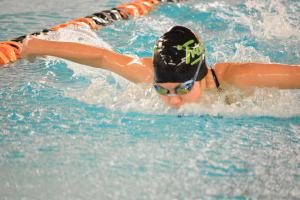 Coach Tremper has been with Trinity for the past eight years, and the current team, the largest so far, has made a huge impact in the swimming community. While rankings fluctuate often, Tremper considers the season a success for both the girls and boys. The boys compete in the Virginia Prep League, and the girls compete in the League of Independent Schools (LIS), both of which include neighboring Collegiate School. Both teams finished 21+ win seasons, and they will be competing at the State Championships held at Saint Catherine’s. The boys were 2x repeating State Champions and last year’s runner-up along with the girls’ team.

The greatest accomplishment for the coaching staff, however, is the love shared by every swimmer. “They really do love each other. It really shows on meet days when they’re supporting each other at the end of the lanes [and] wishing each other good luck, and it makes me proud to be their coach,” Tremper said. 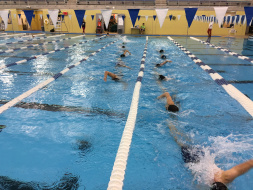 Having been part of the SwimRVA planning since its beginning, The Titans originally practiced in the annexed, instructional pool and didn’t see most of what was going on in the competition pool. The team was able to close the door and focus on themselves. Since moving to the 2008 Olympic Trials pool to practice, the team has been greeted with “more people, and more interactions.” The addition comes from Chesterfield County swimmers who, after years of community support and advocacy by SwimRVA and others, officially joined VHSL Swimming with sanctioned teams at every school.

While Chesterfield County and Prep League schedule conflicts prevent much more than a quick laugh in the locker room, swimmers enjoy seeing old teammates, as many Trinity swimmers swim for clubs as well. Sophie Svoboda, a senior captain who will be swimming for the United States Air Force Academy, and Sydney Whiting,  Sophomore, both swim for NOVA of Virginia. Having both leagues practice together gives swimmers a chance to catch up with club teammates. Coach Tremper is excited about the rapid growth of high school swimming in Greater Richmond. “We love that —high school swimming is taking off leaps and bounds from when we first started,” she said.

Originally, public school students were not able to represent their schools as a VHSL swim team, and some students would transfer to private institutions like Trinity Episcopal just to get a chance to compete. Coach Tremper believes that the inclusion of Henrico, and now Chesterfield, will positively impact swimming programs on both sides. “I think it challenges kids to try [swimming] out if even it wasn’t their thing, or if they only swam in the summer leagues. The accessibility of being  part of a successful team and getting some exercise as well has been a really good thing.” 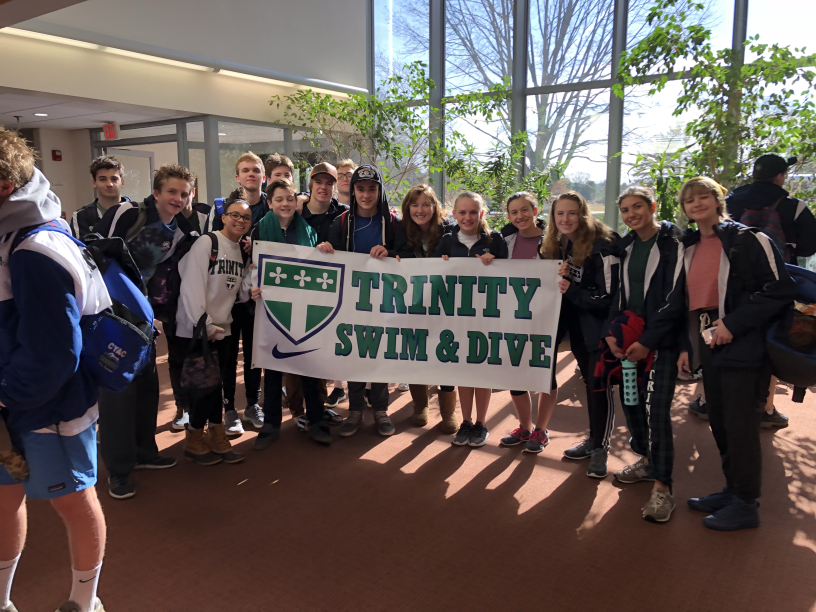 Coach Tremper says future goals include grooming younger swimmers to step up to the plate. “We have a lot of new kids who have come to the team this year, and I think one of the goals for us is to continue to develop those younger athletes; to have them become integrated into the Titan Swim community; and to really buy into the program and what it stands for, so they can carry on the legacy that the seniors have created this year.”

Coach Tremper’s personal goal is to leave the program a little bit better than it was before she got here. “I want my kids to learn to love each other, to learn life skills, [and] to be better humans when they graduate from Trinity.” She and her coaching staff accomplish this by conditioning student athletes to be “Titan Strong.”

Being “Titan Strong” means strengthening the mind and body, and representing both yourself and the school well. To support this mindset, coaches and swimmers frequently discuss how to “Swim for the Shield,” meaning putting the team above individual goals. “Swimming tends to be an individual sport, an individual accomplishment,” Tremper said. “What does it mean to put that aside, to get in the pool day in and day out, not just at meets but in practice, and to come together as a team?”

Many athletes came to Trinity for other reasons besides swimming. “Some come for the athletics, others come for our amazing arts program, others come for academics,” says Coach Tremper, regarding what types of students make up the team. She and the Trinity coaching staff work to instill lessons that can be applied to life in and out of the pool. “If I can impart some sort of guidance or wisdom upon [students] to make them better humans so they will be better prepared for college, better prepared for the real world, then I’ve done my job. Swimming is just the conduit that allows that to happen.”